First things first; before embarking on the purchase of a telescope, if you haven’t already then consider following my six simple steps to get started in astronomy and teach you some basic skills. This will allow you to really make the most of your telescope and soon have it whizzing around the sky.

Eventually though you will hopefully want to invest in a telescope. This can be a minefield and daunting to the newcomer so I hope here to demystify it for you and point you in the right direction. I will introduce some more new terms in this section but will explain as I go along. Please also be aware, the aim of this is to serve as a guide for the beginner, there are many many more aspects to telescopes than covered here so this is a basic guide, the rest you will pick up along the way.

Firstly, there are two main types of telescopes; refractors; which are telescopes that use lenses (similar to those seen in use by sailors) 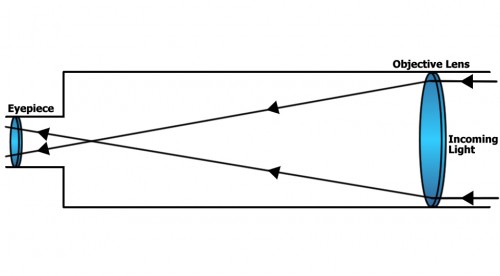 …and reflectors which use mirrors. 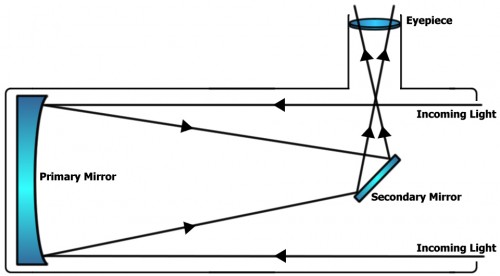 The chief difference for our purposes is cost. Since light travels through a lens (which itself is generally made up of a few lenses stuck together) there are more surfaces of the glass to be shaped (it can be up to 8) than with a mirror which has just has one curved surface which the light bounces off. Ultimately reflectors are cheaper for instruments of same size and same quality of image. This enables you to get a bigger reflecting telescope than refracting for the same price. And remember, the most important thing is size of main mirror or lens, the aperture of the instrument. In this case, bigger is better!

For a complete beginner, having perhaps owned a pair of binoculars, a good starting point would be a modest sized reflecting telescope, something around 150mm (6”) aperture.

Now you will also find telescopes are given another specification, along with aperture, the f/ratio which is related to its focal length. The focal length is simply the distance from the mirror or lens at which the incoming starlight is bought to a focus, this is where the image is then magnified by the eyepiece (more on magnification in a short while). Generally, the longer focal length telescopes the higher the magnification you can get but the darker the image and smaller the are of sky you can see. This is defined by its f/ratio, or the focal length divided by the aperture. Again, a good starting point is a telescope that does not have too long a focal length (slow f/ratio such as f/10) nor too short (fast f/ratio such as f/4).

So you have a telescope and some eyepieces, you now need something to stand it on. A good rule to work to is spend as much money as you can afford on a good solid mount. Consider that the telescope is magnifying the image often in excess of 200x but it also magnifies any wobbles in the image as a result of vibrations in the ground. I cannot overstate the importance of a good solid mount to stand the telescope on.

There are two basic sorts of telescope mounts; the first is the most basic. Its called an alt-azimuth mount and has two axes about which the telescope can turn, up and down (allowing you to move from horizon to the point overhead) and left and right (allowing you to move around the sky). This basic sort is fine and is very similar to the sort photographers or bird watchers use. The only negative side to these is that it is very difficult to attach motors to track things as they move across the sky. Yes, things do move, as the Earth rotates, objects move from East to West and if you point a telescope at an object and watch you will notice it drift slowly out of view. 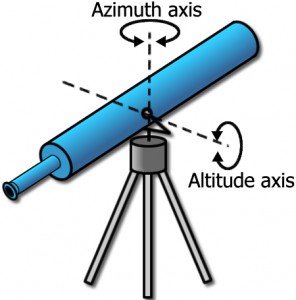 This is problem is resolved in a design called an equatorial telescope mount. This type of mount has one of its axes pointing to the same place in space as the axis of the Earth’s rotation. This means that a motor needs to be attached just on this axis and, if it is correctly setup, it will be able to counteract the rotation of the Earth and thus freeze objects in the eyepiece of the telescope. The real beauty of these is in astronomical photography and if its this that you wish to pursue then you will need an equatorial telescope mount. 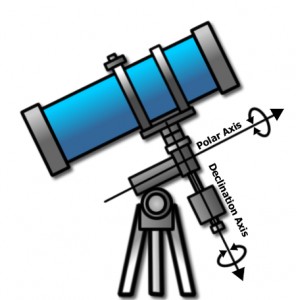 Whilst equatorial mounts do make visual observing a little easier, getting used to the way they move and getting them to go where you want them to go can actually be quite tricky so for the beginner, a telescope with an alt-azimuth mount is a good starting point. Its always possible to upgrade just the mount at a later date and keep the telescope. A great example that is cheap but very easy to use is the Dobsonian telescope mount PIC. They are often made of wood and are ideally suited to the reflecting telescope.

So thats it, having read this should give you enough basic knowledge and understanding of telescopes and mounts to enable you to make an informed choice. The best thing to do now though is to get out to your local astronomical society and try out some different sorts of telescopes. It will make your choice a whole lot easier.

Probably the most important piece of advice though, the best telescope for you is the one you will use often. There is no point in buying a big complicated piece of equipment if you can’t often be bothered spending an hour or more setting it up, when a smaller more modest setup will mean you can be up and running in minutes. Also consider where you are going to observe, from your home then moving it around is not so much an issue but if you have to drive to a dark site then you don’t necessarily want much equipment to move around so take time to think about that too.