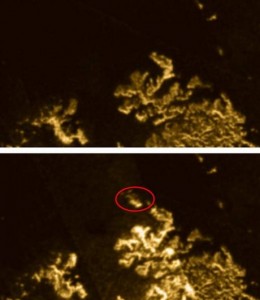 This is exactly why I love astronomy, it is always surprsing me. Just when you think nothing can surprise you anymore… wallop, an island on a moon of Saturn simply appears and then vanishes again just as quickly!

It sounds like the stuff of science fiction but this is no fanciful story. In what seemed to be a previously featureless hydrocarbon sea on Titan an object of unknown origin suddenly appeared in radar images captured by the Cassini spacecraft. Officially the object is known as a ‘transient feature’ meaning it is not permanent but it has been rather affectionately referred to as ‘Magic Island’ by some scientists.

The island appeared in Titan’s second largest ocean known as Ligeia Mare. The Saturnian moon is the only other known body to have stable bodies of liquid on its surface but, unlike the oceans of water here on Earth, Ligeia Mare is made up of methane, ethane and propane.

What is surprising about it is that it is very calm. The radar on board Cassini could detect waves and ripples larger than about one millimetre, but to date, none have been detected. It seems unlikely that tidal or wave action could have revealed the unidentified object but it is plausible that heavy winds have whipped up in the atmosphere of the moon and caused temporary wave like action which has simply been undetected.

Alternative theories have suggested bubbles of gas escaping from the sea bed which may have dislodged some of its floor or some other as yet unidentified floating material. For now though, we still do not know the nature of ‘Magic Island’. Studies will continue and one day we will understand what made that elusive little blob pop up on Cassini’s radar.