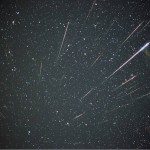 Skywatchers can enjoy about 20 decent meteor showers every year. In April, the stage is set for the Lyrid shower, named becuase the meteors all seem to come from the constellation of Lyra. Overnight between 21st and 22nd April we can expect to see the peak of the shower’s activity even though meteors from this shower can be seen between 16th and 25th of the month. There are many things that affect the visibility of a shower though so what prospects are there for this springtime favourite.

Like nearly every other meteor shower, we see them when the Earth sweeps up the debris of a comet as it ploughs through its orbit. As the tiny pieces of dust and rock get swept up by the Earth like a giant hoover, they plummet through the atmosphere, often at speeds in excess of 50 km per second. As they fall they crash into atmos of gas high up in the atmosphere which heat up and dislodge material from the meteor in a process known as ablation. This material and the atoms of are broken up into charged particles that give off light revealing the characteristic shooting star. Most meteors will get destroyed high up in the atmosphere, any remains gently floating down to Earth as meteoric dust. Surprisingly perhaps a conservative estimate of 40 tonnes reach the Earth every day, that is almost 15,000 tonnes every year! Any meteorites that survive their ‘fiery’ journey and land on the surface are called meteorites.

As the Earth travels through the debris field, all the individual meteors from a particular shower will hit the Earth in parallel paths which will mean the meteors seem to come from one point in the sky, known as the radiant. The location of the radiant is the origin of the name of the shower so meteors from the Lyrid shower seem to come from the constellation of Lyra. Potential meteor activity is defined using a term known as the zenithal hourly rate which explains how many meteors would be seen if the radiant were directly over head. This is rarely the case though and the presence this year of a nearly full Moon will mean the usual forecast for the Lyrids will be lower, around 10-20 per hour.

The best time to see meteors is in the early hours of the morning as you will then be on the forward facing side of the Earth. The ideal time to watch a meteor shower then is when the radiant is high in the sky at this point. Obviously it is down to simple luck whether you live in the ideal location for these two factors to co-incide. To maximise your chances, get out in the early hours of 22nd April and look just after the moon has set and before the sun rises. Wrap up warm, lie back in a comfortable chair and keep your fingers crossed. Good luck.