May 9, 2013 Posted by markthompson Uncategorized No Comments 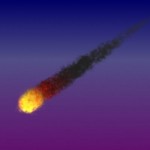 Crazy night last night! I was indoors enjoying a cheeky midweek glass of wine when my twitter timeline erupted with sightings of a fireball streaking across the sky. Most of the tweets came from UK based followers but a handfull on the continent. This is where twitter comes in really useful; following a tweet asking people to let me know where they were when they saw it, how high it was in the sky and its direction I could attempt to calculate its path.

The accurate responses were a little few and far between but an observation from Dorset and a couple of others from Southport and Birmingham allowed me to work out (very) approximately that it must have come in over France or the English Channel and when seen by most people was at an altitude of at least 90km. If it made it over the UK, then it would have tracked over the western part of the country but more observations are needed to be able to ascertain its exact trajectory.

So what was it? Well I have seen a few reports suggesting it might have been a member of the Eta Aquarid meteor shower which peaked earlier this week but it would have been travelling in quite the wrong direction to be one of those. It is also unlikely to have been a piece of space debris because only a handful of satellites have an orbit which takes them in the path that was seen. In my opinion, it is more likely to have been a random piece of space rock that co-incided with the end of a meteor shower.

Would it have landed? For now, that is hard to tell although I suspect it will have been destroyed in the plunge through the atmosphere.

One of the great things about astronomy is that it is unpredictable and keeps all of us on our toes. Events like this don’t happen ALL that often but keep your eyes to the skies and be sure to let me know if you see anything unexpected.

Please note the image in this post is NOT the fireball of May 8th.

Addendum; Just seen another tweet saying someone saw it going from west to east! ahhhhhhhh ;)

This author hasn't written their bio yet.
markthompson has contributed 37 entries to our website, so far.View entries by markthompson

When I talk to people about my attempt to break[...]

You may well recall the Mars Renaissance Orbiter which is[...]

Fascinated to read that a recent study suggests not only[...]