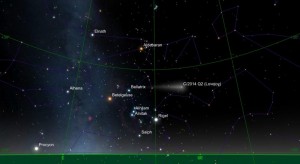 Comets have been in the news a lot lately especially with the excitement of the Rosetta mission to Comet Churyumov-Gerasimenko. It seemed nothing could top the succesful landing of the Philae probe on the comets surface to whip up some celestial excitement among the public until Comet C/2014 Q2 Lovejoy started to make an appearance.

Comets are tricky little blighters, there are hundreds of them in orbits that we understand and can predict but every once in a while someone will spot a distant dim spot of light that was not known about before but steadily it gets bigger and brighter until all of a sudden WHAM, a new comet is in the sky teasing all who hear about it to try and spot it. Comets are known to be unreliable though so forecasts should often be taken with a pinch of salt but this new visitor to our skies seems to be behaving itself….for now at least.

Comet Lovejoy, which was named after its discovery Australian amateur astronomer Terry Lovejoy was first spotted back in August 2014 on its way in toward the Sun. Studies of the movement of the comet over the following months revealed that it takes 8,000 years to complete an orbit of the Sun, placing it well and truly into the family of comets known as long period comets (those whose orbital period is 200 years or more). The last time it travelled by the Earth was around 6,000 BC when copper was first being used in the Middle East and farming had started to appear in central and northern Europe!

Click on the image above to get a larger version to show you where to look in the sky tonight (from UK) around 6pm to spot Comet Lovejoy for yourself. To get the best chances of seeing it with just your eyes, find a dark rural location and give your eyes time to adjust to the darkness, about 30-40 minutes. Look to the east and you will see the easily recognisable three star belt of Orion. Above it and just to the left is the red star Betelgeuse and to its right and a little higher is the blue/white star Bellatrix. Focus your gaze on Bellatrix and Lovejoy should pop out of the corner of your eye to the right. This uses a technique known as averted vision which sends the light from the comet onto the more sensitive rods at the back of your eye. Try scanning the area with binoculars too so you can get a closer look or to help in light polluted skies. Do not worry if you cannot see it tonight, it will be around for a few more nights as it moves north-eastward toward Taurus, the Pleiades and Aries. Good luck and happy comet hunting.