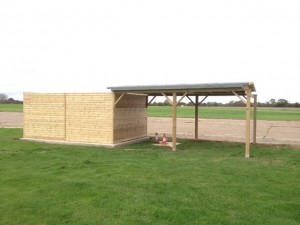 Things have moved on apace (well some things have) since my last post. The exciting news is that the shed/observatory/wooden structure has arrive AND been constructed. I must thank my observatory manager (actually my good friend but I know he will see this and love being called that) and suppliers for putting in a very VERY long day to get it completed. They left site at 2am and that, in anyones eyes, is dedication.

Status thus far then is that we now have a roll-off roof observatory in place with motors attached to open and close the roof. The motor control is currently activated at the push of a button with no remote control currently in place over the internet. The power cable has now been run out to the building as has the network cable to provide internet access.

Next steps are to put in wiring for sockets and lights and install networking infrastructure. That and of course fit the telescope piers in place although the one, BIG task remaining is to resolve just how we can setup the roof controllers to take feeds from both of our systems and only close the roof if both systems request it! I feel a big meeting coming on to bottom out the options but this is ground breaking stuff. It seems no-one has setup an observatory with two independent telescope systems where the roof opens and closes on demand. 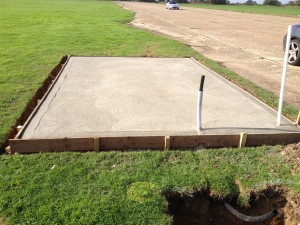 Things are slowly starting to take shape. The concrete slab has been laid and is looking fab. On closer inspection, have noticed the first problem.. boooooo. When the builders were instructed, they were asked to make sure the mains supply cable did not run along the extended line of the edge of the pad (if you look closely at the picture you can see the disturbed soil in the bottom right corner). Given that this is a run off roof observatory there will be supporting posts to the east of the building to take the weight of the roof. Unfortunately, the cable is along the line that these posts will need to go. Waiting to hear back from builders to find out just how deep the cable is buried (expecting 45cm or thereabouts). The posts need to go down about 60cm so may have to tease the cable to the side of the post! Not keen to have to get the cable relaid but if it must then it must!

The observatory may be installed this coming weekend but waiting for that to be confirmed from the suppliers. In other news, have settled on the Moonglow All Sky Camera so order has been placed for that. The investigations into just how the roof controller system is going to work is still underway, more on that soon.

The hole that you can see at the bottom of the picture is where the aurora detector is going to be buried so that will be backfilled with sand/soil. 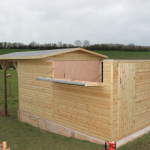 As we slowly settle on various solutions, the one thing that we are certain about is the observatory itself. It is going to be a run off roof observatory (image to left is an example) 4.5 metres by 2.7 metres, it has been ordered and should be arriving around 25th/26th October.

It will be set on top of one large slab of concrete which is deeper in the centre to provide a little more stability for the telescope piers. The single slab makes construction a whole lot easier, especially as it was being subcontracted out to a local builder. The observatory is not going to be used visually so unless there is a burglar on the premises, there will be no foot traffic inside so no need to separate the foundations of the telescopes and the observatory. The slab SHOULD have been poured today (with suitable conduit to allow cables to be run under the floor) but an update from the builder has not yet been forthcoming! 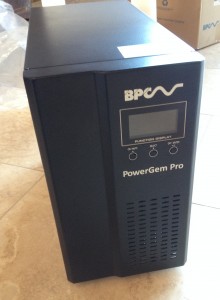 That is chiefly as far as the design has currently got! There are a number of various options being considered for 12/24/240V power distribution, roof control (big headache that bit), weather systems, sky cameras etc etc and annoyingly they are the hard bits. Neither of us like to rush into decisions so options are being kept open for as long as possible until a decision has to be made.

We have at least settled on the UPS system (these are much better than a leisure battery for the more critical applications) which is a BPC PowerGem Pro 3kVA UPS (right)! At least that is one thing ready for installation, although there is still quite a long way to go. Conversations are on going with a couple of manufacturers of roof controllers that may do the job we need or we may go down the route of a bespoke system designed entirely for our purpose but the jury is currently out. Now for another glass of wine to mull over the options…..again. 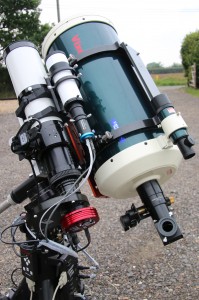 For some months I have kicked around with the idea of setting up my telescope at an alternative location to my garden and, with much analysis of the pro’s and con’s (otherwise known as procrastination) I decided to go for it! As luck would have it, a friend of mine had been mulling over a similar project so we decided to join forces. A suitable plot of land was identified and a lease agreement entered into for an initial three year period from 1st October 2014. Winter is now just around the corner, so what better time to start building an observatory…NOT.

First things first, how were we hoping to use it? We settled on a run off roof observatory as they are much more suited to housing two telescope systems. The ultimate goal is that we can both use our own systems totally independently without interfering with each other but both utilising some shared infrastructure. We were both going to be using our systems either manually – but remotely, essentially using them in realtime with some remote access software or via an automated systems that would once configured, control an entire imaging run from (hopefully) opening the roof to taking flat fields to centring objects, taking images, shutting everything down and closing the roof. Sounds like utopia but as we drilled into the detail, the challenges soon started to appear.

Clearly a simple roof controller to open and close the roof on command was not going to work! There were going to be times when we were both imaging and one of us finished and without thinking, initiates the roof to close while the other was still imaging! The friendship I am sure, would soon ebb away after a few incidents like that. Now we could either go down the rather archaic route of phoning each other before closing the roof but where is the fun in that? No, if this was to be done, it was going to be done properly.

The closure of the roof was the main trouble maker in the whole system design which amongst other things needed to be able to;

-the list goes on, but you get the idea that this was not going to be quite as easy as we both first thought…