Look out for Noctilucent Clouds 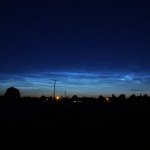 According to NASA, they’re like great “Geophysical Light Bulbs” — turning on every year in late spring and can be seen many evenings during the summer months. To the unwary sky watcher they could be mistaken for just another strange cloud formation, but their true nature is much more puzzling.

“Noctilucent clouds,” to use their correct name, gives a hint as to their origin and appearance. They are clouds often seen eerily illuminated at night, low on the north/western horizon. They seem to appear at their most intense after prolonged periods of low solar activity. For this reason, you might also hear them called “night-shining clouds.”

Browse the photos in this slide show to admire the magnificent beauty of these natural, and manmade, “night shining” clouds.

For any cloud to form there must be water vapor and tiny microscopic particles for the vapor to condense around — a process called nucleation. Despite the dryness at these altitudes, convective activity could carry water vapor high into the mesosphere. However, the origin of dust particles remains a mystery.

Regardless of how they form, we can be sure, year after year, during late May and early June, they will honor us with some awesome displays. Strangely, this hasn’t always been the case!

The discovery of this phenomenon is attributed to Robert Leslie when he recorded a sighting in July 1885 from Southampton, UK — it’s curious there are no reports or records of noctilucent clouds before 1885.

Perhaps they are evidence of climate change, as the first observations coincided with the industrial revolution — since then, our pollutants may have been driven high into the upper reaches of the atmosphere to facilitate their formation.

Perhaps they are linked to volcanic activity, as they were first seen just two years after Krakatoa erupted. But while the effects of the eruption have died down, the clouds have persisted ever since and they seem to be spreading!

It’s also possible the airborne particles from which they form originate from meteoroids entering the atmosphere.

Their origins may remain a mystery for a few more years, but thankfully we can still enjoy them.

If your latitude is 40 degrees or more then you should be able to spot noctilucent clouds right now. They are easy to find and don’t require telescopes or binoculars. Just look north/west (the direction of the setting sun), about 30-60 minutes after sunset and if you see luminous blue or white tendrils stretching across the sky, then you may have spotted one of nature’s most beautiful sights, a sight we may have had some part in creating.