A True Ambassador, Not Just For Canada But for All Mankind! 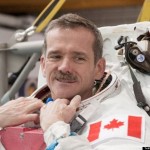 Nearly all of my blog posts have been inspired by events or objects in the wonderful universe we live in. It is not often that I blog about people yet today, having finally watched Commander Hadfield’s incredible rendition of David Bowie’s ‘Space Oddity’, I feel compelled to write about a man who is not only an astonaut but a great ambassador for humanity.

It has been fascinating to follow Commander Hadfield’s antics while on board the International Space Station over the last five months. Using the power of social media he has single handedly managed to bring space exploration back into the news with his inspired posts from an altitude of around 400km! He has posted some stunning views of Earth and then followed them up with fun experiments that he posted on YouTube, yet his latest video really was the icing on the cake.

The latest masterpiece from this now iconic astronaut is his own rendition of the classic Bowie song and within a matter of hours it went viral across the web with David Bowie himself responding with ‘Hallo Spaceboy’. The words seemed so much more poignant coming from an astronaut who really was ‘sitting in a tin can, far above the Earth’, albeit a very expensive and complicated tin can.

I found myself feeling quite humbled as I watched the video with my thoughts drifting to the wonderment of science and it’s ability to break down international barriers. On board the International Space Station, which itself has been built by 16 countries, are citizens from Russia, the United States and of course Cmdr Hadfield’s home of Canada. It fills me with comfort and hope that regardless of all the issues and negativity down here on Earth that there is a purity and companionship in space that seems to transcend nationality, creed or colour.